About twenty hours into the game I rolled credits on XCOM 2. No, I didn’t beat the game in that time. I lost, and the aliens won. Thirty hours later I would I have my revenge. Apparently, this was a common experience for people who played 2012’s XCOM: Enemy Unknown. Lead Designer Jake Solomon said in interviews before XCOM 2’s release that many players lost their first time through Enemy Unknown, and that informed the set up for XCOM 2. Whether through skill or dumb luck, I beat Enemy Unknown fairly easily. Its sequel on the other hand provides quite a challenge, and I think it’s a better game for it.

Before I go any further, I should make it clear that I played XCOM 2 on a computer that should not be able to run this game. It is far below the minimum requirements, and the game ran at a completely awful framerate for me. The reason I say this is because people have reportedly had bad technical issues with this game. I think it would be disingenuous for me to talk about those issues playing the game the way I did. However, the fact that I enjoyed it so much despite my horrible technical experience should speak for itself.

At first glance, anybody who played Enemy Unknown will immediately recognize XCOM 2. It is still a game about commanding a group of soldiers on a battlefield who are fighting against an alien invasion. The activities in between missions include researching new technologies, building new armor and weapons to take into the field, and expanding the XCOM home base. On the surface, XCOM 2 is a very iterative sequel, but it iterates in ways that make it wholly better than its predecessor.

XCOM 2 takes place in a timeline where the aliens won in Enemy Unknown and have taken full control of Earth. Therefore, the soldiers you are in charge of are not a defending force with widespread international support. Here, they take the role of scrappy rebels, fighting back against the oppressive alien overlords. What is impressive about XCOM 2 is how far Firaxis has gone to capture this feel. Everything from the aesthetic changes over time to the pace and difficulty of the gameplay reinforces the idea that you are the leader of an insurgency and not a powerful force. 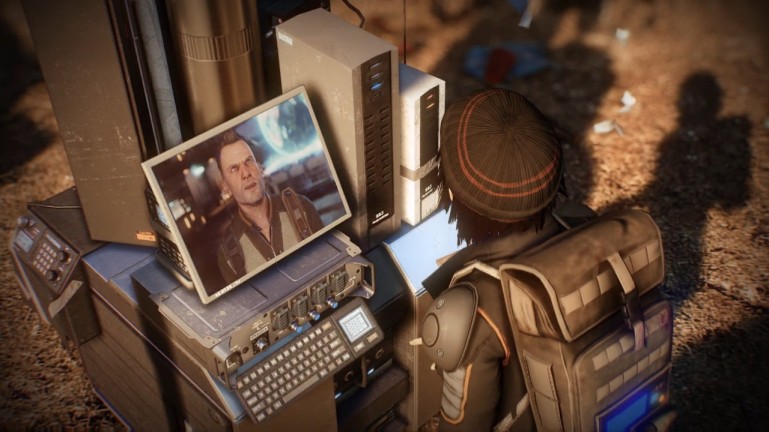 The most prominent change to the way XCOM 2 plays is the addition of timed missions. A lot of the missions undertaken throughout the course of the game involve an objective that have to be complete in a certain number of turns. This alleviates one of the major problems of Enemy Unknown where players were able to move slowly and cautiously throughout the level, never using all of a soldier’s movement by dashing and always using the overwatch ability that allows them to fire during the alien turn. XCOM 2’s timed missions don’t give players this luxury. Instead, they have to run through the level to get to the objective fast enough. This led to situations where I was triggering multiple groups of aliens at a time in order to complete an objective and then had to fight my way out of tough situations. This makes the player feel somewhat powerless, something that games often shy away from doing. It also forced me to make tough decisions. There were times when I would end up sending in a low level soldier as a sacrificial lamb to complete the objective while I kept my high ranking officers back to deal with the aliens.

Not only do the timed missions add depth to the strategic gameplay, but they reinforce the resistance themes that are so prevalent in the game’s narrative. The difficulty they provide is reminiscent of the fact that the aliens are the one with the advantage, and the frantic pace required to complete a mission invokes hit and run attacks as a substitute for head on battles. The fact that they become less prevalent over the course of the game reinforces this idea even further. As the team’s armor and weapons are enhanced and their influence spreads to more regions, they also have the ability to face the aliens in more direct ways. XCOM 2 does not have a strong traditional narrative, but it evokes its themes very well. 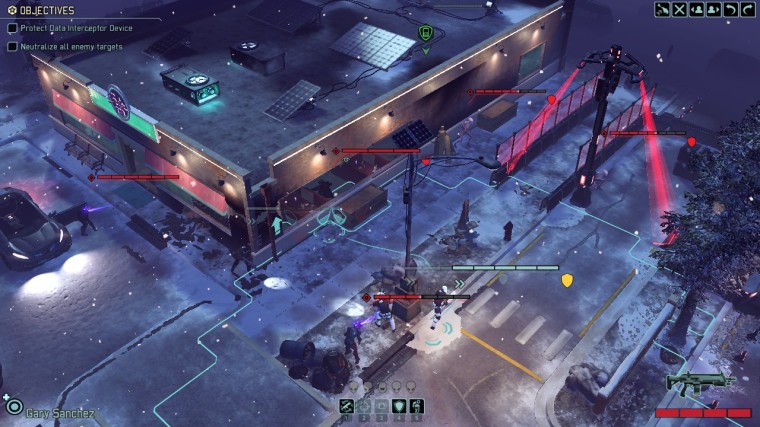 The timed missions are not the only way that XCOM 2 asserts its difficulty. Soldiers that undergo tough missions can now become shaken, an effect that makes them more prone to panicking and losing a turn in the field. The only way to remove this trait is to have them get through a mission without panicking. One of the enemy units has a stun baton that can render a soldier unconscious, making them useless for the duration of the mission. Even worse, if the mission requires the soldiers to evacuate, one of them has to carry the unconscious member to the evac zone. The base level sectoids and thin men in Enemy Unknown have been replaced with enhanced versions that take the form of more menacing sectoids and alien snakes called vipers. The new sectoids are more likely to utilize mind control abilities, while the vipers grab soldiers with their tongue and wrap around them, requiring another soldier to kill the viper in order to free its captive. And these are just the early game combatants. While there is a disappointing amount of enemies in XCOM 2 that are just alien humanoids, there are also some pretty horrifying creations as well. Old enemies like Berserkers have gotten grotesque upgrades, while new additions such as the corrosive andromedon and the shape-shifting faceless were immediately intimidating.

Despite these challenges, XCOM 2 gives the player new ways to fight back. Stealth is a new feature that allows soldiers to get the drop on the aliens and catch them off guard, typically opening them up for one attack where they are completely out of cover. Furthermore, the different classes in XCOM 2 are more distinct than they were in Enemy Unknown. Rangers come equipped with a sword that can do brutal damage at close range. Sharpshooters can focus on either snipers or pistols. Specialists each have their own field drone that makes them effective healers and hackers. And the increased usefulness of explosives makes the grenadier a powerful unit. While the classes in Enemy Unknown had what seemed like obvious decisions to made about what skills to take, almost every skill in XCOM 2 is useful. It makes squad lineups more diverse and encourages the player to experiment and train new units. 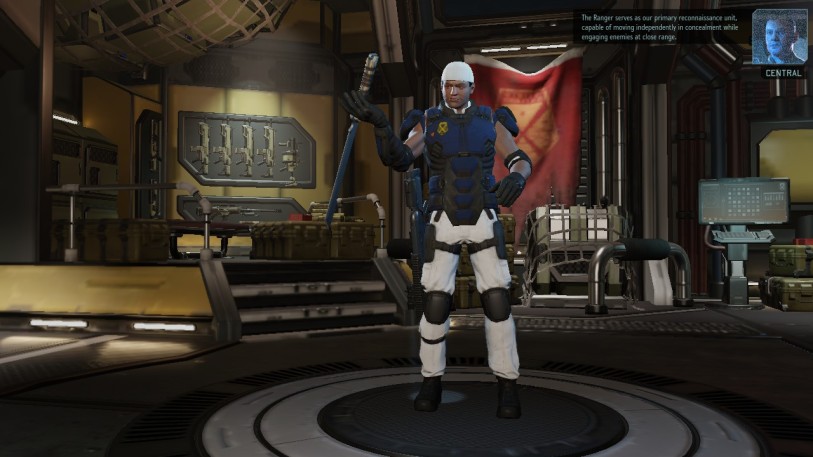 The other player-friendly change comes in the form of the fail state mechanics. The satellite system in Enemy Unknown was obtuse, poorly explained, and relegated to a secondary menu away from the map. With XCOM 2 being about trying to expand influence as opposed to hold it, this system obviously wouldn’t work. It is replaced with the Avatar Project, an alien plot that acts as a doomsday clock. Over time, the aliens will make progress towards the Avatar Project, and the game ends upon completion of the project. The player can undertake specific missions, some within the story and some optional, that slow down this progress. It is all very clearly displayed on the main map and easy to understand.

An upgrade in XCOM 2 that does not make the game but adds much welcomed context is the base itself. Engineers can be seen working in the facilities they are assigned to. A soldier in training will be doing push-ups or running on the treadmill in the guerrilla tactics school, and other soldiers will even work out with him or her. Soldiers not in training can sometimes be found in the living quarters or the bar, trying to pass time between missions. Also in the bar is a small memorial in the form of a wall full of pictures of fallen soldiers. Here the player can view their stats and even write a short eulogy about them. These are all small details, but they combine to make the soldiers feel like real people as opposed to just a bunch of statistics. 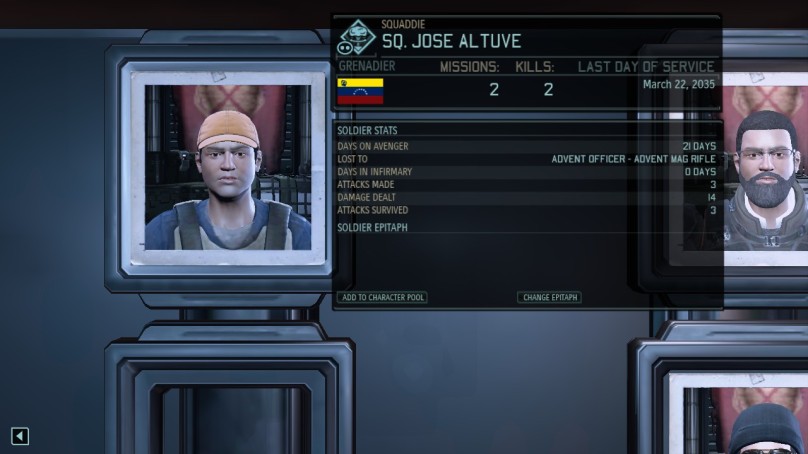 XCOM 2 is a tremendous strategy game and a wonderful alternate universe follow-up to Enemy Unknown. It takes what that game did and expands upon those ideas to create a game that is equal parts more frustrating and more satisfying. This might in turn put some fans of that game off of this one, but those looking for a tactical challenge will find XCOM 2 to be the more fulfilling experience. I fall into the latter camp.