As you drive around Australia, radio DJs and the helpful voice in your ear Keira often comment about how Horizon Australia is the largest Horizon festival yet.  This is reinforced by the fact that you progress through the game by gaining an exorbitant number of fans and expanding the festival.  The idea of the festival growing exponentially throughout the years draws a poetic parallel to the games themselves.  What was once thought of as a surprisingly good spin-off of the Forza Motorsport series now both sells and reviews better than the franchise it spawned from.  But that is not to say that the quality of the Horizon games is on a continuous upwards trajectory.  Forza Horizon 2 was a step back from the original game, and while 3 manages to make good on a lot of that game’s failings, it still doesn’t reach the heights of Playground’s debut effort.

Forza Horizon 3 is a beautiful game, and the dedication the team has both to the cars and to the Australian countryside is clear as day.  While developing the game, they actually sent people from the studio to Australia for months so they could photograph the sky and then use those photographs to make the in-game sky accurate.  And you can tell that they know how beautiful the environments are. The game has these things called beauty spots where you can pull up to one and be given a brief overview of the location you’re in while the camera pans out to give you a good view.  A similar thing happens when you reclaim a barn find.  Your mechanic gives a brief history lesson or an anecdote about the car while showing you a bunch of different angles.  Forza Horizon 3 might be the prettiest game on the Xbox One, and the developers love to show that off any chance they get. 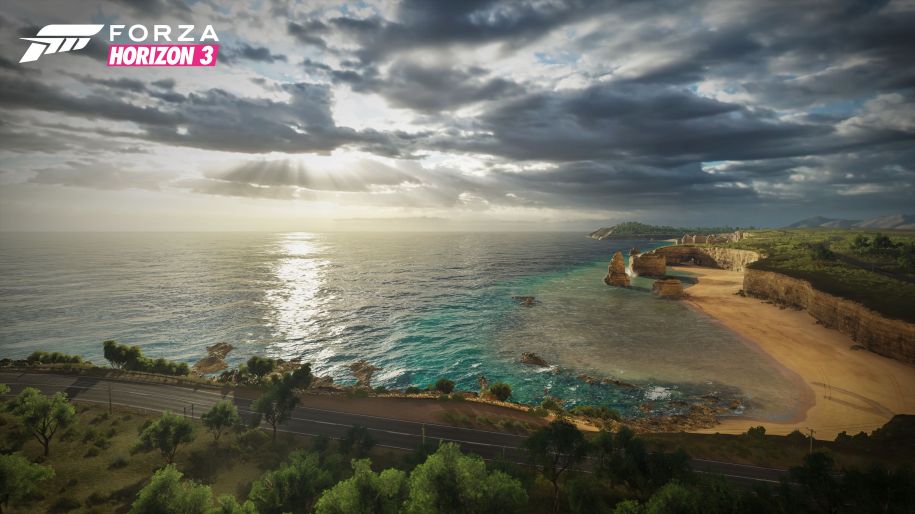 But the games greatest strength lies in its environmental diversity.  You can race through a rain forest, down city streets, or across the outback.  The map is expansive enough to house all of these environments and more without feeling rigidly segmented.  The car selection is equally diverse.  Everything from a 1960’s luxury vehicle to a modern super car is at your disposal and raceable.  There are even some super weird deep cuts like the three-wheeled 1972 Reliant Supervan III. And the diversity of Forza Horizon 3 extedns to the ways the game can be played as well.  The game offers truly different experiences for different types of players.  If you want to turn off all the assists, crank up the difficulty, and go into cockpit view, you can do that.  If you want to take it easy, abuse the rewind button, and enjoy your surroundings, that’s also an option.  Forza Horizon 3 is still a racing game at its core, and there is no way to completely escape that.  However, it gets pretty close to allowing you to just play it as a driving game.

The biggest upgrade that Forza Horizon 3 has received is in the form of its progression.  Forza Horizon 2 fell into a loop where you went to one of the six distinct cities, completed a four race championship, and then moved on to the next city.  Even the first game fell victim to the fact that only certain races contributed to your wristband progress.  Forza Horizon 3 tracks your main progression by increasing the amount of fans you are attracting to your festival.  You can do this by completing a multitude of event types in any of the four locations.  You can decide to do a championship in the outback if you are in the mood to race a specific type of car in that area.  But you can also chose to compete in an individual race down by the beach and then another one in a lumber mill.  PR stunts, such as speed traps and drift zones, help you accumulate fans; as do bucket list events, which are more thoughtful and varied than they were last time around.

I just wish they went all out with this and made everything you do count towards more fans.  Barn finds are the standout omission, but there should be similar, non-racing oriented events that contributes to your fan number.  Fan amounts also aren’t balanced very well.  If you really want to progress late in the game, you need to start doing championships.  It creates a mixed message with the diversity of experiences that could be on offer.  If you want to just cruise around Australia and wreck havoc you can, but if you want to see the big showcase events and expand to new areas you have to start racing.

The thing that people who spend most of their time in the open world benefit from the most is the skill system.  Any type of mayhem you cause, be that near misses, slamming through fences, or drifting like a madman, contributes to an ever building skill chain.  The chain breaks when you smash hard into a tree, wall, or other car.  But if you manage to go a few seconds without increasing your chain or hitting anything, you then bank the points that you were building up.  It’s a nice risk/reward system that is almost exactly the same as it was in Forza Horizon 2.  The problem is that it doesn’t really get you anything.  Most of the skills you can spend points on just allow you to get more skills.  There are a few standouts, like fast travel anywhere, that you can build to, but you also don’t miss much by not engaging with the system at all.  Forza Horizon 3 didn’t need a skill tree to be a great game, but it’s disappointing that the one that is there is still useless. 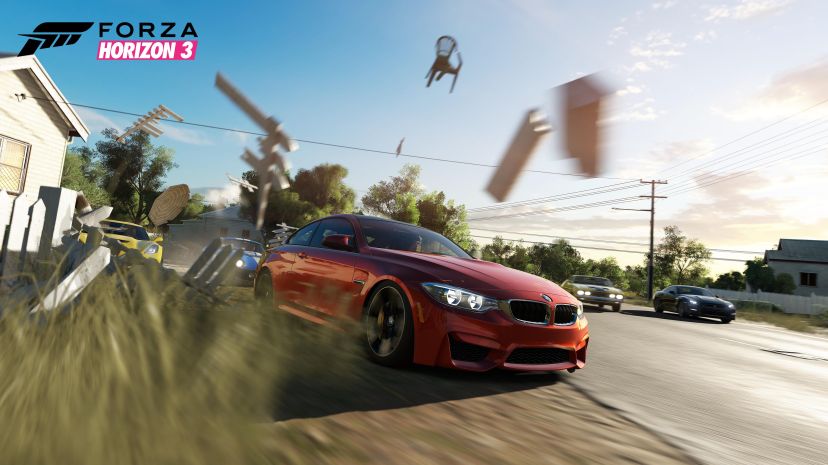 The racing is a lot of fun in Forza Horizon 3, as is just roaming the countryside.  But the franchise is in desperate need of a shakeup when it comes to side activities.  Showcase events are still a nice visual showpiece, but they are starting to lose their luster.  Barn finds are still cool and much less annoying than they were in Forza Horizon 2, but they also haven’t changed much since the first game.  Illegal street races are back, but they feel like an afterthought.  If it wasn’t for the improved bucket list challenges, I think I would have spent 80 percent of my time racing.  And that’s a shame because the open world in Forza Horizon 3 is a lot more fun to explore than it was in Forza Horizon 2.  I often found myself either messing around with jumps or just driving into the distance to see what I could find.  I just wish the activities in the game encouraged this more.

The game also lacks a lot of the personality that made the first game so great.  You’re now the boss of the festival, and Keira keeps mentioning that you’re the boss of the festival, but you never really feel like the boss of the festival.  It doesn’t even really feel like there is a festival.  In the first game, the festival was an integral part of the experience.  It was the centerpiece that you would keep returning to.  And at each level you had a rival with a personality that you were trying to beat.  Forza Horizon 2 lost all of that, and this game doesn’t bring any of it back.  A racing game doesn’t need a story per se, but the original Forza Horizon was great at setting a tone that both sequels have failed to deliver on.

Forza Horizon 3 also has all the same multiplayer features that Forza Horizon 2 had.  You can group up with people to race or compete in other game modes online.  You can also now team up with three other people to play through the campaign.  Clubs are back, as are community created paint jobs, and every car has an XBLA name over it.  You can also now hire up to four friends to help you run the festival.  They don’t actually do anything, you just get bonuses to fans, money, and XP based on their in-game level.  In my opinion Forza Horizon 3 would be just as good of a game if you unplugged your internet, but these features are there and all work properly for people who want to engage with them.

Saying that Forza Horizon 3 is the best open world racer of this generation is not saying much.  The only real competition is its inferior predecessor and some mediocre Need for Speed games.  But that shouldn’t take away from the game’s accomplishments.  Playground Games has managed to create a great racing game that can appeal to the entire spectrum of players.  They have also created a world that is fun to explore and breathtaking to look at.  The franchise needs to shake things up more in the next installment, but Forza Horizon 3 is a great game nonetheless.