Coming into 2016, there were few games with as many question marks surrounding them as DOOM. Even as somebody who was on the more positive side of things, I said the following about the game last January: “In the end, I expect a solid shooter that fails to do anything special, which will probably be a problem for a franchise as revolutionary as Doom.” Boy was I wrong on that front. Special doesn’t even begin to describe what turned out to be one of the best singleplayer shooters in years.

The most unforeseen thing that id Software got right was tone. They paint a picture of the Doom Slayer as being an almost mythical being who is feared by the demons of Hell. When the game starts, he awakes from a sarcophagus that he has been enshrined in. Within seconds of being awoken, he is already killing demons. This is his one purpose in life, and he is more than capable of handling it.

On the other side of things is the UAC, a corporation who has started using Hell to generate argent energy. What started as a “humanitarian” effort has gone awry as some members, led by scientist Olivia Pierce, have taken to worshiping the demons of Hell. Pierce has decided to open a permanent portal to Hell, allowing demons to spill over into our world. The Doom Slayer has been awakened by UAC Chairman and 10-foot-tall robot Samuel Hayden to stop Pierce and close the portal.

However, Hayden and the Doom Slayer don’t see eye to eye on everything. While the Doom Slayer just wants to kill every demon and stop the invasion for good, Hayden wants to keep mining Hell for its resources. The two of them need each other and both want to stop Pierce, but they have different end goals in mind.

All of this is presented flawlessly throughout the game. The Doom Slayer never speaks a word, but his motivation and frustration with Hayden is made clear through his actions. Phrases like “Demonic presence at unsafe levels”, which implies that there is a safe level of demonic presence, show just how far gone the UAC is. Codex entries for the characters, enemies, and locations do a great job of presenting the lore in a way that is interesting and funny. And this all works because the game takes itself seriously. The characters aren’t in on the joke of how ridiculous everything is. It just is ridiculous, and it manages to be self-aware without telling the player how self-aware it is.

The gameplay of DOOM is both fun in its own right and reinforces everything set up by the story. The core idea of the game’s narrative is that the Doom Slayer is the most powerful being imaginable. Therefore, when he walks into a room full of demons, he’s not going to hide behind a crate or a wall in order to take them out. He’s going to run up to them and tear them apart. Because of this, the gameplay has to be designed in a way that always keeps the player at the center of the action.

When an enemy is staggered, they flash and become open to what the game calls a “glory kill.” These are execution-style melee attacks that are guaranteed to kill the enemy. The animations get a little tired after a while, but the glory kills serve a greater purpose than just looking cool. When an enemy is killed with one, they are guaranteed to drop health. This means that it is strategically advantageous to be in the enemy’s face, because that’s the way to stay alive. The chainsaw, which causes the enemy to drop a bunch of ammo, is a variation on this idea that’s just less prevalent in the game. 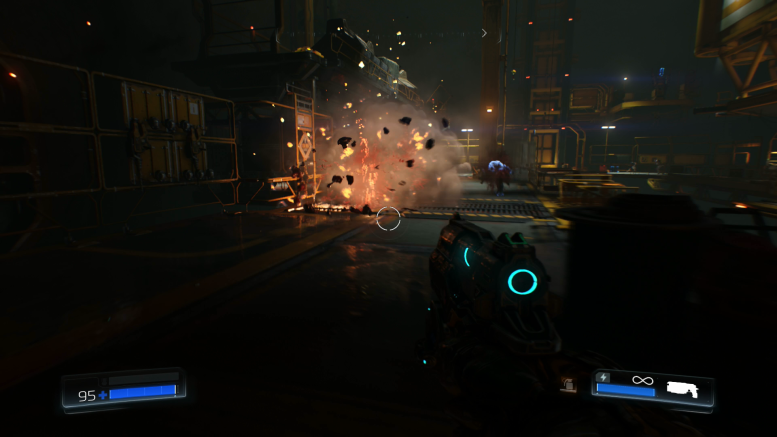 And even if the player chooses to ignore these mechanics and try to hash it out from the edges of the battlefield, there are mechanics at play that will force them to be in motion. A lot of fights are triggered by the Doom Slayer destroying gore nests, tiny little portals to Hell whose destruction causes a bunch of enemies to spawn. These are typically placed in the center of a room and force the player to start a fight surrounded. DOOM is also a game with dodge-able projectiles. If the player is standing still for too long, they are going to get hit by fireballs and missiles, if not enemies that are charging at them and knocking them around.

DOOM’s combat has a natural flow and speed to it that is absent in most shooters these days. However, it is also not simply a recreated version of the original game’s combat that feels outdated in 2016. It is a careful blending of old concepts mixed with new mechanics that creates a system that is empowering without being too easy. If played right using the systems to their fullest, the Doom Slayer will crush the demons like the mythical menace they claim he is. However, this requires a lot of input from the player and is deeply satisfying because of that. When the Doom Slayer rips apart a gore nest, demons spawn everywhere, and Mick Gordon’s bfg Division kicks in, I wanted nothing more than to grab my shotgun and shoot every demon in the face.

But while the story and gameplay are both fairly original, the game still has a reverence for the franchise’s legacy. The weapons and enemies are almost all directly from or altered versions of those in the original DOOM and DOOM II. In addition, the game keeps a lot of gameplay traditions like fast-paced movement, dodge-able projectiles, and guns that don’t need to be reloaded. There are also plenty of other surprises that I think are better learned about on their own.

The game features the same great level design that the franchise is known for as well. Levels that loop back around on each other without requiring a lot of backtracking and secrets that only the most thorough explorers will find are both aspects of the original and the reboot. The added ability to jump and even double-jump only open up the options that the developers have when creating these levels, and they use them to full effect. I felt like I explored every nook and cranny of the game, but I came out of every level struggling to find even 50 percent of the collectibles and weapon upgrades hidden within.

However, there is a part of Doom’s legacy that seems forgotten by the developers of this new entry. While it was never something I played, multiplayer was a huge part of the original DOOM. It’s the game that coined the term deathmatch, and while the reboot does have a multiplayer mode, it isn’t very good. There is nothing particularly wrong with it, and it also doesn’t feel super derivative of any other shooter. The main problem is that it’s just boring. The maps are a bit too big for their own good, and the whole concept gets away from what makes the singleplayer fun. DOOM is fun because it is one powerful marine going up against an army of demons. A group of equally powered marines fighting each other is a big departure from this, and it means that none of the other things that make the combat so great carry over into the multiplayer.

The other mode in DOOM is snap-map, a user generated content initiative. This allows players to create their own singleplayer and multiplayer maps using assets both from this game and from original DOOM. This is a great way to bring modding to consoles, and people have created cool levels with it. There is definitely an audience for this mode, but I personally found it to be not user-friendly enough. It would benefit from some better tutorials.

Despite these lackluster modes, the singleplayer is the meat of DOOM. It is lengthy for a shooter campaign and is worth the asking price on its own merits alone. The other modes can’t detract from what is one of the best shooter campaigns in years. The combat is thrilling, the levels are intricate, and the story is just the right amount of crazy. Rebooting DOOM seemed like an impossible task in 2016, but id Software have managed to develop a game that stands up amongst the storied studio’s best work.